The Diana Savident Memorial Bursary is a bursary awarded to a woman in Prince County pursuing a career in Visual Arts.

The bursary is intended for female residents of Prince County 18 years of age and older, and is awarded annually.  The award is given to an applicant who displays the most potential for development and sense of exploration in the visual arts epitomized by Diana Lemire Savidant's own career.

To request more information on how to apply, please complete the online form below and email your resume to [email protected]

This is a two step process.  Please complete the form below, then email your resume and a cover letter that explains where you plan on going to further your education and what your intended career path is to [email protected]

Diana Lemire Savidant was born in Rouyn, Quebec, and grew up in Montreal and Ottawa. She lived in PEI since 1973. Diana's philosophy is an artist is an explorer. She did, indeed, explore ever since picking up her first sketch pad and pencil as a young teenager in Ottawa.

Diana studied at Lasalle Academy in Ottawa, Emily Carr College in Vancouver, Mt. Allison University in Sackville, Holland College in PEI and at a number of local workshops.  She worked in, oil, watercolour, alkyd, gouache and fabrics.

Diana maintained her own studio in Summerside and exhibited her work regularly.  Major exhibitions of her work were shown at Holland College School of Visual Arts, Eptek National Exhibition Centre, and Evangeline Arts Centre.

A major exhibition of Diana's featured ink, watercolour and gouache representations of almost 50 historical homes and buildings in Summerside.

Her works are owned by art lovers in most Provinces in Canada, many of the United States and a number of other countries. One of her works forms part of the permanent collection of Commonwealth House in London, England. 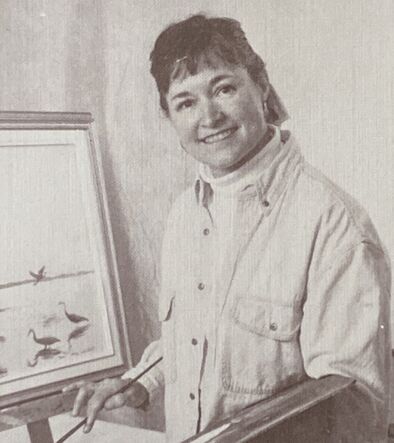